What are the ripple effects of the epidemic on the garment supply chain?The latest study from the International Labor Organization is out 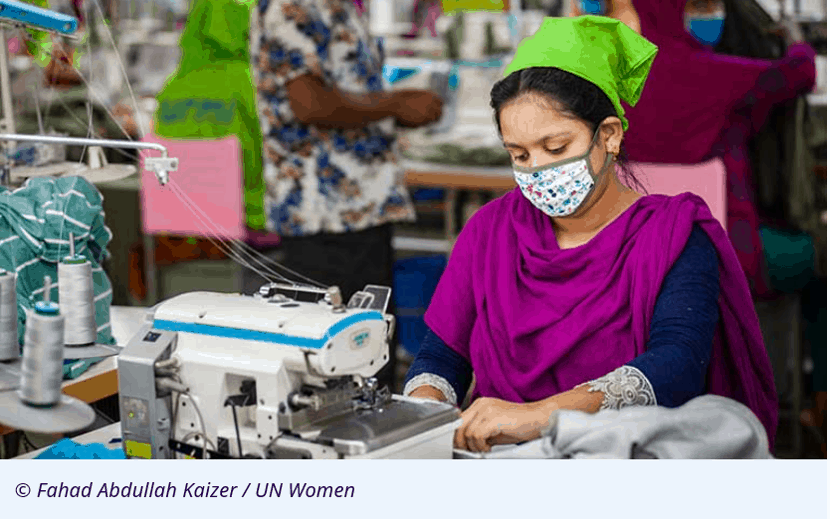 On October 21, 2020, at 4pm Beijing time, the International Labor Organization (ILO) held a meeting in Bangkok, Thailand to discuss the latest research report, “Supply Chain Chain Reaction: How does coVID-19 Affect garment workers and businesses in the Asia-Pacific Region?”Hold a press conference, which will be held online.Ilo Senior Economist for Asia and the Pacific Christian Viegelahn, Senior research and policy expert Arianna Rossi of the Better Jobs Program, and Director of communications Tara Rangarajan attended the conference to present the findings of the program and to answer the core questions.

The Ilo works to promote decent work and improve living standards for all;Strengthening social security;To protect the life and health of workers.The COVID-19 pandemic is having a major impact on the garment industry in the Asia-Pacific region, which employs about 65 million people in 2019, about 75 percent of the world’s garment workers, 35 million of whom are women.

Supply Chain Reaction: How is coVID-19 Affecting workers and businesses in the Garment industry in the Asia-Pacific Region?From January to early September 2020, the coVID-19 epidemic has had a profound impact on garment workers and factories in 10 Asia-Pacific countries, including China, in a digital and graphical manner.

Chihoko Asada Miyakawa, ILO regional director for Asia and the Pacific, said: “This study highlights the huge impact of COVID-19 on the garment industry at all levels.Governments, workers, businesses and other industry stakeholders should work together to address these unprecedented challenges and create a more people-centred future for the industry.”

This study sheds light on the ways in which coVID-19 outbreaks are having an impact on the clothing industry.COVID – 19 outbreak, the report suggests, have serious impact on garment industry in the asia-pacific region, these effects include direct effects, such as garment factory in the asia-pacific region temporarily shut down or collapse, and as a result of a large number of unemployed workers, unemployment, as well as by indirect form, such as export market retail sales slump, raw material importer blockade will affect the garment factory survival condition in the whole supply chain.

The study also sheds light on the impact of coVID-19 on the garment trade and its supply chain.In the first half of this year, the value of clothing imports from Asia by major importers fell 70 per cent.In addition to Myanmar, China and other nine Asia-Pacific countries generally saw a year-on-year decline in exports to the European Union, the United States and Japan, the three major markets.China has been affected since January, while Vietnam, Indonesia, India, Bangladesh and other countries have been affected since February.Compared with the decline in clothing trade, exports of protective equipment have risen sharply.From January to June 2020, China’s exports of masks increased 708 percent compared with the same period in 2019, accounting for 49 percent of the total value of apparel exports to the European Union, Japan and the United States.The investigation also found that the cancellation of international orders was very common under the epidemic situation, which caused serious economic losses to garment factories.Large Numbers of international customers reduce or cancel orders, suspend deliveries or ask suppliers for discounts or extend payment deadlines.A survey of 179 suppliers in 30 countries, including China, found that 64 per cent of garment factories had received cancellation requests, 18 per cent said the cancellation had resulted in a total loss of receivables, and 35 per cent had been asked to offer discounts of more than 20 per cent.

In addition, the study summarizes the challenges coVID-19 poses to garment workers in 10 countries.A large number of employees are unemployed or unemployed due to lockdowns, shutdowns, etc., and the situation varies from country to country.According to Indonesia’s Ministry of Industry, 812,254 workers, or about 30% of footwear workers, were fired as of July 2020.In Myanmar, some 22,000 garment factory workers lost their jobs;In Cambodia, more than 150,000 workers are unemployed;In Vietnam, about 80 per cent of garment factories have laid off some workers.In addition, in countries such as Bangladesh, Cambodia and India, a significant proportion of workers are paid late or are not paid in full, increasing the risk of disputes between employers and workers.The study also showed that women workers have been hit harder, with wages still lower than men in the epidemic, but women have had to balance work and childcare responsibilities as a large number of nursery schools have closed.During the epidemic, it was also found that pregnant women were fired from factories under pressure from their operations, while domestic violence increased as a result of the embargo and financial difficulties of families.

Finally, the report points to the future direction of the garment industry and calls for increased support for businesses and workers to deal with the crisis.

Supply Chain Reaction: How is coVID-19 Affecting workers and businesses in the Garment industry in the Asia-Pacific Region?Based on extensive desktop research and open data analysis, as well as interviews with key industry stakeholders in Asia.The research project was carried out by Cornell University and the INTERNATIONAL Labour Organization (ILO) with the participation of the Ilo Regional Economic and Social Analysis Unit (RESA), Better Work and the ILO – Swedish International Development Agency’s Decent Work In The Asian Garment Supply Chain.