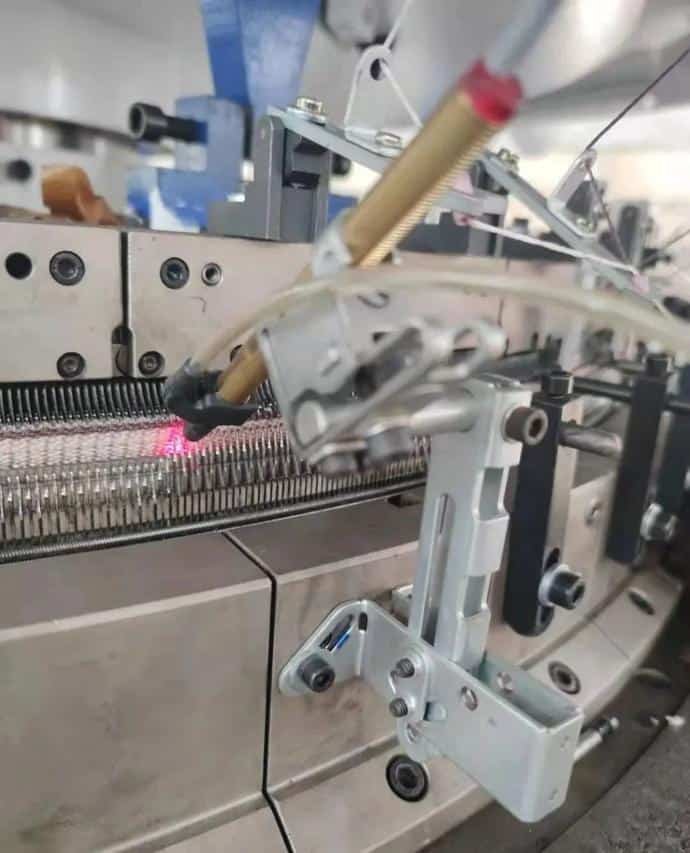 A knitting machine is running stably when suddenly the red alarm light above the machine lights up and the machine stops automatically.The guard found a slight defect on the cloth surface. It turned out that there was a bad needle on the equipment. After replacing the new needle, the machine continued to operate normally.

Scenes like this every day in the knitting factory in shaoxing, zhejiang province, just over a year ago, however, if there is a bad needle, machinist often is not found in time, and then with a large number of defective fabric, so the damage caused by each device per year on average up to several thousand yuan, which makes enterprise liu, head of the trouble.

“It is difficult to achieve the stability of quality management by completely relying on manpower, so the intelligent upgrading and transformation of knitting enterprises is the only way.”Mr. Liu said.”But the production environment of knitting enterprises is complex, and the degree of refinement and stability is very high. We have tried some foreign knitting needle testing equipment before, but none of them can achieve the desired effect.”In fact, what Mr. Liu mentioned is exactly the common problem that our textile industry faces when it comes to intelligent upgrading: if the technology is not perfect, the upgrading and transformation of the factory will not only fail to achieve the effect, or even cause the opposite situation.

With just mentioned knitting machine needle breakage detection technology as an example, Mr. Liu said that the principle of this technology is not complicated, but in the actual production, knitting “opportunity, contamination detection equipment, causing downtime by accident, not only affects the work efficiency, also will stop mark on cloth, affect the product quality.In addition, the small vibration of the circular machine during operation may also affect the detection signal.In short, the technical stability of intelligent equipment is the key to the intelligent transformation of enterprises.

In the past, when it comes to technical bottlenecks and key problems in this industry, we first think of solutions from foreign equipment.However, in recent years, the domestic textile industry has developed rapidly. From the initial imitation and follow, “crossing the river by feeling the stones”, to now, we have been standing at the same starting line with foreign enterprises in many fields, or even the leading position. Going forward, there is no stone to touch any more.

Still knitting machine needle breakage monitor products, for example, shaoxing, liu said: “when I tried again and again a few companies in the developed countries of equipment, but the effect is not ideal, then contact with the product of a domestic enterprise, we are not very hopeful at the beginning, think of developed countries are not solve things, Chinese enterprises is difficult.But did not expect, the result is beyond our expectation, domestic products both in precision and accuracy are fully meet the requirements of the enterprise!”

The Chinese company mentioned by Mr. Liu is Tianjin Hetian Electric Appliance Co., Ltd., whose leader Zhang Min, general manager, said: “We have started to set up a project to study the needle breaking monitoring technology of circular machine since 2006, and we have carried out five generations of product improvement and iteration successively.For example, Mr. Liu from Shaoxing mentioned the problems of flying flowers blocking the lens and the signal instability caused by machine vibration. We modified more than 100 solutions, and after thousands of tests, we finally solved them completely in 2019. At the same time, we obtained two national invention patents and seven utility model patents.The latest generation of broken needle monitor products can not only operate normally on a 40-pin high machine number, but also maintain the industry record of 10,000 hours of continuous and stable operation.”

The present complicated external environment, China’s textile industry is in an unprecedented period of change, for companies, just like a seed, rooted in the fertile land of themselves, to drive, self-improvement, growing, with changeless should change, to storm the murky market environment in the future, show vitality.