No orders for half a year, now usher in the outbreak!Foreign trade clothing boss 8 days to sell two months sales! 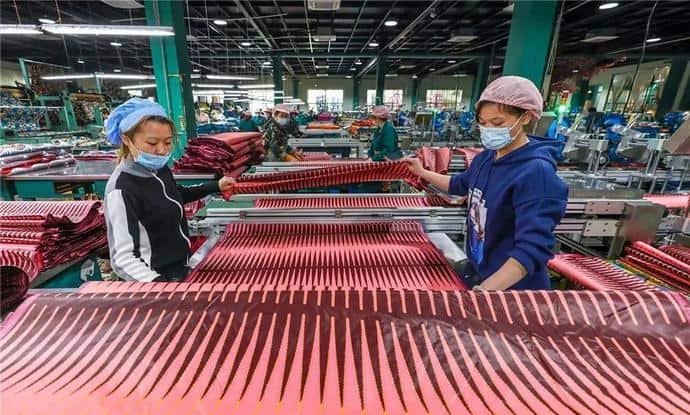 内容 隐藏
1 During the eight days of the holiday, I sold about two months ‘worth
2 Export orders from Guangdong garment factories, which have been deserted for half a year, have soared
3 Clearing the backlog is the first step in helping themselves
4 Adjust the proportion of offline and online sales
5 Improve “small single quick reverse” ability

During the eight days of the holiday, I sold about two months ‘worth

During this year’s Spring Festival, many people were unable to go out shopping due to the epidemic, and they mostly bought clothes online.It has been held in for half a year, which really makes everyone hold it in bad. This is not the case, people went out shopping during the National Day holiday.”In Taitung, less than 30 square meters of foreign trade clothing store, owner Sun Xiao is helping customers choose new winter clothes, to her surprise, this year’s National Day holiday clothing sales are not lost last year.

In the first half of the year, business in Sun Xiao’s store was “bleak” and could only be boosted by online stores.”By July, I felt consumers’ offline purchasing power was gradually returning. I had a hunch that the National Day holiday would usher in the usual shopping season, so I started buying autumn and winter clothes in advance.”Sun told reporters that since October 1, her shop has been crowded with customers during business hours, and that she extended her business hours by half an hour when she was supposed to close at 9 PM.”In terms of offline store sales, one day’s holiday sales is equivalent to one week’s sales in August and September. I roughly estimated that during the eight days of the holiday, I sold about two months ‘worth of goods.”Sun said that as a self-employed business owner, she expects citizens’ purchasing power to increase steadily after the holiday compared with previous years.

Export orders from Guangdong garment factories, which have been deserted for half a year, have soared

Deng Richao, who runs a foreign-trade clothing factory in Guangzhou, breathed a sigh of relief in July.”Orders began to return, and the turnover for two consecutive months was double that of the same period last year. In August, the production capacity was nearly 300,000 pieces, up to 15% of the entire production capacity last year.”As the epidemic stabilizes in China, Deng’s factory has not only resumed its previous operations, but the “retaliatory” increase in orders has even kept workers a little busy.

The reason for the “hot” foreign trade clothing orders, Deng Richao said, on the one hand, is due to the gradual stability of the epidemic in China, many factories after June supply chain resumed operation, which means that orders can be rereceived;On the other side is demand from overseas consumer markets, which are still functioning despite the outbreak. In September, the traditional peak season for Thanksgiving and Christmas supplies in Europe and the United States, orders surged, especially online.

Like most garment factory, at the beginning of this Deng Richao also carried on the stock, but the sudden outbreak of disrupted all rhythm, making factory in May 2 – almost at a standstill, during the period of “the cancellation of the order last year, we make the goods you send us also won’t let go, turnover fell by 95% during that period, it will be in the future (how) also don’t know.””Said Deng.

Clearing the backlog is the first step in helping themselves

To this end, clearing as much of the stock as possible during the epidemic is the first step in their efforts to save themselves.

In order to clear the inventory, most export businesses will turn to the domestic market to sell goods at a low price. A small dress for daily life will cost 60-100 yuan or so, and the factory will reduce the price by half at a loss.Deng Richao said this was a helpless move, out of the capital chain and through the epidemic consideration can only be “cash king.”However, such a practice once led to a price war within the industry, and the domestic market digestion capacity of its industry is relatively limited, a short period of clearance is not easy.

As they try to clear inventory, they are also turning more to online channels.Deng observed that some of his peers, who still adopted traditional models such as offline freight, were eliminated in the epidemic.However, the response of online channels including Alibaba and other e-commerce platforms during the epidemic shows that there is still a demand for foreign trade procurement.

Adjust the proportion of offline and online sales

Mr. Deng’s factory began adjusting the proportion of offline and offline sales the year before, and by the end of last year, online channels had contributed 90 percent of its revenue.Transformation of earlier online channels for Deng Richao added confidence, in the past few months, the company increased the online mining customers, and increase the investment in the online channel, including increased in alibaba platform promotion expenses, also please to some professional teams to help optimize the company’s web site, easy to order on the Google search engine wiring.

In early September, Deng’s factory attended the Alibaba International Shopping Festival, trying to showcase original designs to overseas markets through live shows and other means, while also hoping to win new customers.The live show has attracted a lot of attention. According to the data from Alibaba International Website, the number of people watching the live show during the peak period was as high as 20,000, and the number of enquiries and clicks increased by 300%, which increased by about 70% in the whole month of September.

Deng Richao told Jiemian News that the company’s enquiries have increased by at least 50 to 200 percent compared to the previous, although no orders have been completed, but he believes it will provide some help for the subsequent development.”It may take a long time for the offline market to recover because the epidemic will permanently change the purchasing mode, while the share of online purchasing and sales will continue to increase after the epidemic.””Said Deng.

However, more “networking” also means a higher demand on the supply chain.

In recent years, consumption upgrading has brought decentralized and personalized market demand, which has gradually changed the “mass supply” mode of clothing supply chain.Deng Richao revealed that in the post-epidemic era, this mode will gradually become history and orders will become more and more fragmented, which has a huge impact on the supply chain. Specifically, orders are smaller, unit prices are lower and delivery speed is faster, but manufacturers have to carry out cost control.This means that factories cannot strike a balance between such contradictions without optimizing their own supply chains.

For ultra-fast fashion brands, they generally have strict requirements on the supply chain. The shortened process from sample making to production is usually as fast as 7 days, which is 7 days less than that of Zara. In addition, the performance of e-brand products is also faster and the cost is lower.As a brand OEM and wholesale enterprises, Deng Richao admitted that they themselves face pressure is not small, plus orders will be more fragmented, can only constantly find ways to improve the ability of “small orders quick reverse”.

On the one hand, the factory needs to push back and predict the market demand trend based on the real-time sales data to help adjust the production strategy quickly.On the other hand, it is also necessary to accurately calculate the “smooth stagnation” according to the real-time feedback of the product sold out rate. For slow-selling products, it can be quickly cut off, while the best-selling products can be quickly tracked to ensure the supply. For the popular categories in the market in the current season, the development of the next band can be added to improve the hit ratio of hot style.

In addition, in order to shorten the passage of goods from the supply chain to the consumer, they are strengthening the links between manufacturers, designers and logistics, so as to quickly organize flexible production, Deng said.