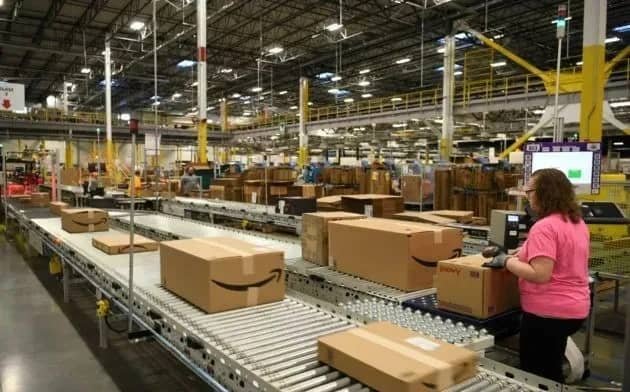 The Verdi union in Germany called on Sunday for employees working at seven different Amazon (AMZN.US) sites to strike in a protracted pay dispute.

German services union Verdi said workers at some of Amazon’s warehouses in Germany had begun a strike campaign on Monday, Reuters reported Nov. 1.

Verdi, a leading service industry union in Germany, which is Amazon’s largest market after the United States, has been organizing strikes at Amazon’s factories in Germany since 2013 to protest low wages and poor working conditions.

Without providing exact figures, the German union Verdi Verdi said the strike, which coincided with the Halloween holiday, was aimed at demanding that Amazon raise wages in line with an agreement the union reached with the broader retail and mail-order industry in Germany.

Earlier this year, Amazon said in a statement that it would offer excellent pay, benefits, and career opportunities and would guarantee a starting salary of €12 per hour in its German warehouses starting in July, rising to at least €12.50 per hour starting in the fall of 2022.

Amazon’s wages currently exceed Germany’s minimum wage of €9.60 per hour. However, the minimum wage in Germany will rise to 12 euros if the next coalition government of the Social Democrats, the Greens, and the Free Democrats reach an agreement.

Just in time for the second half of the peak sales season, order demand soared, Amazon warehouse employees, as well as truck drivers, face a shortage of supply and demand tension.

Some time ago, Amazon has been recruiting a large number of part-time full-time employees at various sites around the world and said it will provide higher pay and treatment to prepare for the peak season. Even hope to recruit marijuana personnel to expand the range of employees. Such a situation, coupled with the workers’ strike, will add to the tension of this shortage of supply and demand.

From the root cause, the strike is still due to the lack of labor caused by the increased workload, manpower is also insufficient, Amazon employees face pressure and workload can be imagined.

If this strike is not resolved well, sellers’ goods will certainly be affected. With the bad news comes the good news, naturally!

According to past experience, it is generally difficult to appeal when the second trial is rejected, however, one after another, sellers have received the second trial account activation email.

Some sellers said that three new numbers submitted utility bills all passed, and even a friend’s previous refusal to die also passed.

The second trial account recovery news in the sellers circle quickly spread, some sellers said this is the best news received by Amazon since this year, feel as surprised as in the peak season burst single!

In the mail, Amazon informed the seller’s account has been activated, and the previous may be the reason for the misjudgment, so it led to but the trial.

But not all accounts that encountered the second trial can be unblocked, there are some sellers who said they have not received an email.

An informed seller, 90% of the sellers who encountered the second trial account were reactivated by Amazon, but only for new accounts registered soon after, the old account previously encountered for other reasons did not recover.

For this Amazon bulk unblocked second trial account, some sellers said that it may be due to the recent Amazon Merchants Platform link under the store, encountered too many sellers of the second trial, and the investment pressure this year is too great, so it was forced to open restrictions.

Currently do not know what Amazon is because of the reason for the bulk unblocked accounts, but for sellers who have not yet received the Amazon email notification, these days can pay more attention to their registered email to see if their stores have returned.