Let the BBC down!Xinjiang apparel factory director responded to the so-called “forced labor” : not true, the most troublesome employee job-hopping 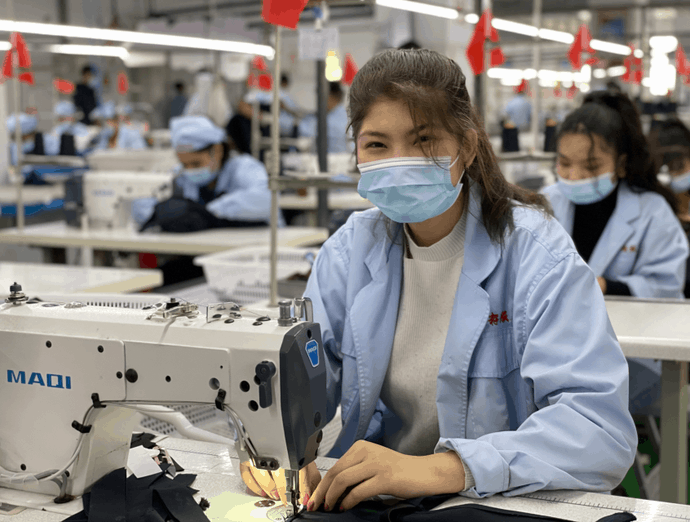 内容 隐藏
1 “Half a million florists a year”?The mechanization of cotton production in Xinjiang has debunked rumors by anti-Chinese scholars
2 A BBC correspondent says filming in a public area has been blocked, to which the client responds
3 Factory director: there is no “forced labor”, the most troublesome employee job-hopping

A white cotton, in the eyes of anti-Chinese forces is not only to keep out the cold.More recently, they have found more uses for cotton, the ubiquitous crop in Xinjiang, as a new vehicle for what the West calls “forced Labour”.Under the headline “China’s tainted cotton”, the BBC15 report quoted anti-Chinese scholars as saying that “China is forcing hundreds of thousands of Uighurs and other ethnic minorities to undertake arduous manual Labour in the vast cotton fields of Xinjiang”.Recently, we interviewed in Aksu, Korla and other places and found that cotton production in Xinjiang has long been highly mechanized. BBC’s report is seriously inconsistent with the facts.

“Half a million florists a year”?The mechanization of cotton production in Xinjiang has debunked rumors by anti-Chinese scholars

“New evidence suggests that more than half a million ethnic minority workers are deployed to seasonal cotton-picking jobs each year in conditions that may be highly coercive.”The BBC report quoted Cheng Guo-en, a senior researcher at the Memorial Foundation for Victims of Communism, an anti-Communist group in the United States, as reaching this conclusion in what it called “research”.In recent years, Zheng Guoen has become famous by concocting false academic achievements on anti-China issues, and he is the backbone of the anti-China research institution set up by the US intelligence agency.That followed an announcement on Dec. 2 by the U.S. Department of Homeland Security that customs and Border Protection agents would detain cotton and cotton products from China’s Xinjiang Production and Construction Corps at all U.S. ports of entry, citing the corps’ “presence of forced labor.”

The BBC report also says that in 2018, aksu and Hetian regions “sent 210,000 workers through labor transfers” to pick cotton for the Xinjiang Production and Construction Corps, a “Chinese paramilitary organization,” and that “there are many signs that this participation is not entirely voluntary.”

But our interviews in Xinjiang reveal a huge factual error: cotton production in the region is so mechanised that even during the busy picking season there are no “florists” employed.People in the local cotton industry tell us that if the efficiency of artificial harvesting is maintained, it is often impossible to harvest the cotton every year until December.However, the reporter visited several cotton processing enterprises, the cotton harvest has been completed, the processed cotton bales were placed in orderly rows, waiting to be shipped to the downstream enterprises.

Taichang Agricultural development Co., LTD. Legal representative Li Chengjun responsible for the company’s agricultural sector has been 12 years.He said 22, starting in 2015, bazhou area agriculture cotton output has been mostly cotton-picking machine, and the xinjiang production and construction corps mechanization to achieve sooner, “before 2016 cotton-picking workers quantity is large, the most from the inland provinces such as henan, sichuan when you need to recruit more than 3000 worker picking cotton, inefficient, now, a cotton harvester day can receive 400 mu, the company of more than 60000 acres, machine mining, 15 days picking 85% basically.It only takes one or two hundred men to clear the cotton fields.”

Li chengjun is not exaggerating; we learn that highly mechanised cotton production is indeed no longer fresh in Xinjiang.Gao Ruinan, business manager of Xinjiang Haoxing Cotton and linen Co., LTD, which has been purchasing cotton from xinjiang Production and Construction Corps for many years, said Thursday that the corps’ mechanization is earlier than local ones, and now the cotton machine yield of the corps has exceeded 90 percent and even reached 100 percent in some places.

A BBC correspondent says filming in a public area has been blocked, to which the client responds

The BBC report is full of imagination.In Xinjiang, the report said, “many factories have appeared within the walls of ‘re-education camps’ or not far from each other, suggesting that mass employment and detention are parallel targets”.The report was accompanied by satellite images of Aksu Kuqa to prove that “the factory and camp now appear to have merged into a large factory complex”.

“I can solemnly say that the Center has been closed since 2019.”On The 24th, at Kuche Pomegranate Seed Clothing Co LTD, which the BBC calls a “large factory complex”, factory director Huang Bingyou responded bluntly: “We are just an ordinary factory. The management staff are all hired from the mainland, not sent by the government.”

Interestingly, and perhaps fearing that the interview material would not be enough to support his fantasy, the BBC’s John Sudworth, who wrote the report, made much of how he was “repeatedly prevented from filming by the police, local propaganda officials and others, and repeatedly followed for hundreds of kilometres by a large number of unidentified people in vehicles”.Mr. Sahlei and his team also posted footage of a brawl outside the pomegranate Seed company, in which a middle-aged man blocked his shot with his hand and was described as “even though the BBC team was shooting only on the public road outside the factory, they were repeatedly blocked by officials of different identities.”

“This is black and white!”We tracked down the man in the video, jiang Yong, not the “government official” referred to by the BBC, but the head of pomegranate Seed’s logistics and security department.”On the morning of November 19, our security guards saw foreigners filming the factory floor with cameras. I went out and told them not to shoot. But they immediately turned their cameras on me,” Jiang explained.As a factory manager, I have the responsibility to protect the safety of the factory. As an individual, I also have the right to my own image!”

We learned that after Sha Lei and others were found, their vehicle quickly drove away, constantly in circles around the neighborhood and secretly filming, until the traffic police received the alarm to stop.Jiang Yong tells us that when ShaLei etc people constantly claimed that he was taken in “public area”, he felt this logic absurd: “you see them standing here, only a few tens of meters, workshop according to their logic, if there is not a factory, but my home, I bathe the toilet in the home, also can let them in the ‘public space’ shoot at random?”

Mr. Jiang said he was most angry when one of the journalists apologized and said his image would not appear on any public platform, only to have the footage of him blocking the camera quoted out of context as “local officials blocking interviews” and described as “more suspicious.”Jiang yong was amused: “We have nothing to hide, but the staff are working hard. I was so emotional at that time because I had been photographed by foreign media before and the report was totally defamatory.”

Factory director: there is no “forced labor”, the most troublesome employee job-hopping

What’s on the factory floor?The answer may come as a “big disappointment” to our correspondent, but when we walked in on The 24th, we saw the same sort of things that garment companies in many parts of Xinjiang do: spotless workshops, brand new machines and well-dressed staff in overalls.According to public information, the pomegranate seed company, established in March 2020, mainly produces school uniforms, bags and other products, and most orders come from Xinjiang.

The 23-year-old workshop leader, Alejia Abba Bakri, is a smiling girl. This is her first official job and she earns about 2,500 yuan a month.The most important thing, she told us, was realizing a childhood dream: learning to design clothes.The workers’ dormitories were converted from spacious housing blocks, complete with central heating, hot water and private toilets.Female worker Genaguli Guhalamu showed reporters around her dormitory, attracted by the paper flowers plastered on the walls.She said she and her roommate cut it out in their spare time.

To reinforce the perception of “forced Labour” in Xinjiang, the BBC report highlights the “mobilization and organisation of the government” in the recruitment process.To this, factory director Huang Bingyou tells us, this is not true.When the factory was first set up, he says, managers handed out job ads to surrounding villages, and each village had a contact.Those who live near the company can come in the morning and come back in the evening. Those who live far away have dormitories. At the beginning, more than 1,800 employees were recruited.The factory will also subsidize part of the salary during the training period to meet the minimum wage standard. “There is no coercion at all. As an enterprise, the most troublesome thing is that employees ask about the salary of other enterprises privately.

Why would a company that is supposed to “put profit first” travel all the way to Xinjiang to train workers with relatively low skills and subsidize wages?Asked about this question, Huang said, “Once our enterprises make money, they should invest in society to help more low-income people to get rich together.This is what our Chinese civilization has inherited.”