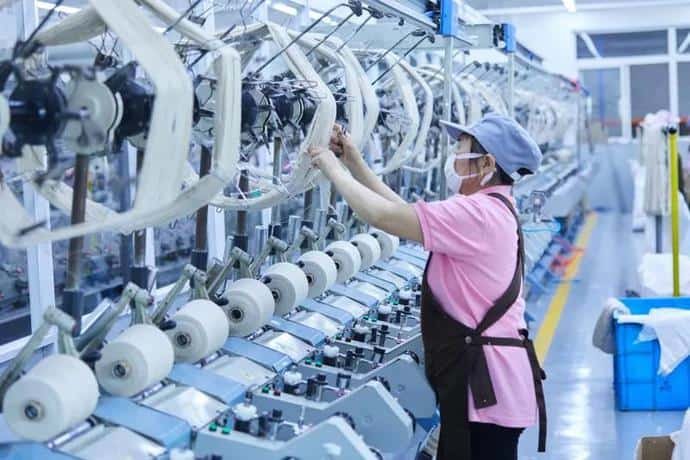 内容 隐藏
1 Meagre profits are eaten up by the exchange rate
2 Capital chain is tight, some small and medium-sized manufacturers have the risk of capital rupture at any time
3 Orders will hardly last until December

According to feedback from cotton textile enterprises in Shandong, Jiangsu, Anhui and other places, over the past week, the inquiry and delivery of high-count pure cotton yarn and polyester and cotton yarn have been smooth. C40S and below ring spun yarn and OE yarn are gradually recovering under the pull of “gold, nine, silver and ten” in the end consumer market (the demand for 40S yarn continues to improve), and the inventory of most cotton mills is accelerated.

From the perspective of the chemical fiber polyester market, the number of orders on the market has indeed increased since September. According to what we have learned from the market in the past two weeks, the number of orders received by textile enterprises in September has improved significantly compared with that in August.Mr. Yang, a company specializing in chemical fiber and human cotton fabrics, said that since September, the number of foreign trade orders has increased significantly, mainly for the fall and winter coats and down jackets, including elastic products such as T400 and cool silk cotton.

From the aspect of weaving inventory and opening rate, it can be seen clearly that the opening rate of weaving enterprises continues to rise after September, while the grey fabric inventory starts to decrease gradually.

Although downstream weaving, clothing, foreign trade companies such as payment for goods pay more is given priority to with 1-3 months payment days, start, but the whole textile industry chain, slow speed of signs, which are fully as domestic epidemic control, production, living, economic activity, such as income gradually back on track, buyers, retailers are starting to placing a order for 2021 spring and summer.The confidence of textile factories, cloth factories and textile and clothing enterprises rises continuously with the terminal enterprises receiving orders and stocking goods.

However, according to the survey, textile enterprises have some concerns about whether the end consumption after October can be “effective”. The production capacity of spinning and weaving is somewhat reserved, and the equipment load is generally maintained at 75-85%. In addition, they should try their best to realize “quick order receiving, quick processing and quick delivery”, and “eliminate finished product inventory and speed up capital flow”.

Meagre profits are eaten up by the exchange rate

After the outbreak of COVID-19 in the United States, the Federal Reserve did not exercise restraint in releasing water, and finally the flood came.With the US printing press in full swing, the DOLLAR index has fallen since late March and shows no signs of reversing.Since the end of May, the RMB has continued to appreciate. The USD/RMB exchange rate has risen from 7.17 at the end of May to over 6.8 at present.At one point, the renminbi had appreciated nearly 5 per cent since its low for the year in late May.If exporters earn less than 5% of their profits, they may be working for nothing, or even at a discount.Especially for low-margin labor-intensive enterprises, which had already suffered a sharp drop in orders due to the epidemic, their meagre profits were later eaten up by the exchange rate.The continuous and substantial appreciation of RMB against THE US dollar is beneficial to the import of cotton and cotton yarn and at the same time obviously weakens the export competitiveness of China’s textiles and clothing.

Capital chain is tight, some small and medium-sized manufacturers have the risk of capital rupture at any time

From the perspective of the current market inventory, in September, the inventory of some manufacturers has decreased, but the inventory of the whole industry is still at a high level. However, the recovery of foreign trade demand is not as expected, and there is the possibility of a second outbreak of the epidemic. Many clothing and home textile brands are reducing their stores, adjusting their production plans, and purchasing fabrics more cautiously.As a result, there are big doubts about whether the next inventory can be converted into capital.

In addition to short-term difficult to liquidate inventory, then there is this year the boss reflect common payment days are getting longer, and the existence of default, a trader said: “now payment days in 3-6 months, default payment for goods is not rare, receivables and 3 into not received at present, although the customer is not interested in arrears, but if the customers are such default, will make our cash flow.It is very likely that they will stop production and close down.

This year, due to the epidemic, the whole industrial chain has been all but destroyed.Whether knitting factory, traders and clothing companies are very short of money, which lead to this year’s payment for goods payment days longer than ever, we have learned, downstream weaving mill, garment factories and traders company account receivable generally perform 1 to 3 months period, and raw material purchasing are cash spot, so the whole tight cash flow enterprise, some small and medium-sized manufacturers have the funds at any time the risk of fracture.

Orders will hardly last until December

Recently, orders began to increase, and the weaving opening rate gradually improved, but the downstream order follow-up is insufficient, and the overall order quantity is lower than previous years.September picked up as the domestic market picked up, but also because of seasonal orders for autumn and winter fabrics.However, the continuous epidemic overseas has a great impact on clothing demand, and the order volume is limited, so it only lasts for half a month.

According to feedback from companies, orders for the second half of the year are usually placed between the end of September and the run-up to Christmas.The second outbreak of the epidemic overseas forced some enterprises to close down, which obviously affected the demand for clothing, resulting in a small number of foreign trade orders.In addition, compared with the same period of the previous two years, domestic orders generally have a decline of more than 20%, and from the point of delivery, it is difficult to support orders to December.

Outbreak is like a mirror, he put the grounding exposed some problems within the enterprise, at present a lot of small textile enterprises said life is not the best, especially this year many big companies, with its fine management can reduce the cost, large quantities of quantities to occupy the market, a few small enterprise market space will be squeezed, the steps of market evolution in faster.