China, Japan and South Korea textile industry video work conference: based on the present, work together 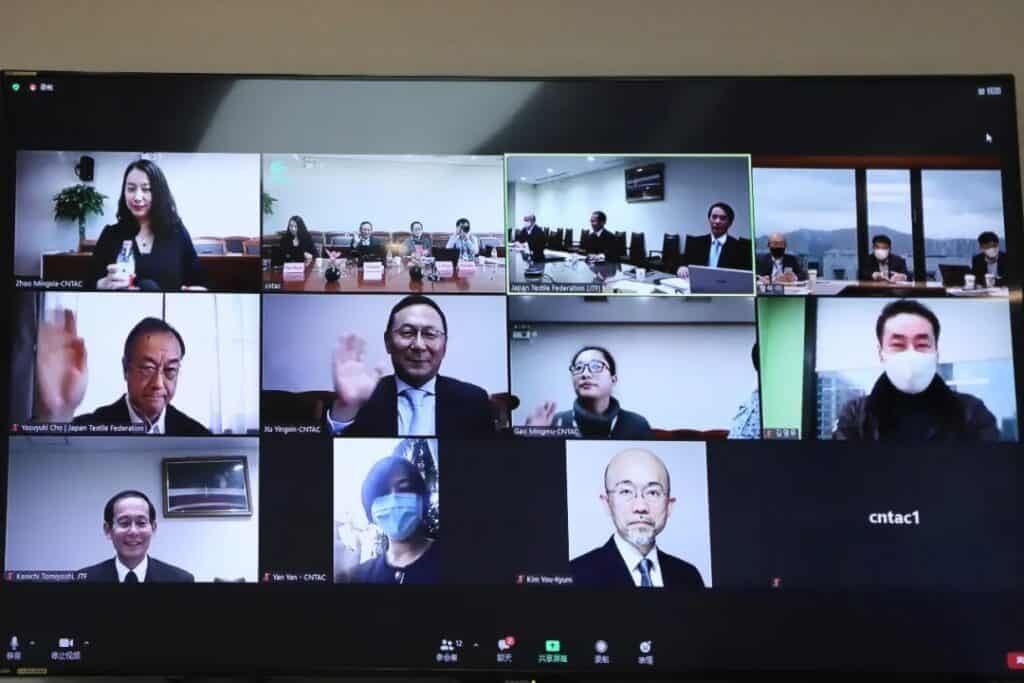 Due to the COVID-19 outbreak, the 10th China-Japan-ROK Fiber Industry Cooperation Conference, which was scheduled to be held in Osaka in November this year, was postponed after consultation among the three parties.Japan Fiber Industry Alliance proposed to hold a video conference on the textile industry of the three countries in November this year to exchange and discuss “the current situation and prospect of the textile industry under the COVID-19 epidemic”, and China and the ROK expressed their support.

At the meeting, Fuji Kenichi, vice President of Japan Fiber Industry Alliance, first introduced the relevant situation of The Japanese textile industry.Since the outbreak of the epidemic, Japan’s GDP growth rate in the second quarter of 2020 has dropped by 28.8% compared with the same period of last year. By the third quarter, the GDP growth rate, driven by export demand, has reversed, far exceeding the level of the same period of last year.In terms of production index, the fiber industry has recovered ahead of the overall textile industry, thanks to increased demand for epidemic prevention materials such as masks and protective suits.According to a survey of household spending in Japan, spending on clothing and footwear fell to its lowest level in April, then picked up briefly in June and continued to fall after that.In terms of clothing sales, physical sales have been hit hard, and gradually improved after entering the second quarter, with chain stores selling better than department stores.In terms of import and export, the exports of Japanese textiles to China and South Korea continued to decline in the first half of the year. Since the second half of the year, the exports have increased, and the exports to China continue to recover, but are still lower than the same period last year.The import situation, from February to May, the import of textiles from China surged, after July, the import of textiles from South Korea grew faster.

Xu Yingxin, vice President of China Textile Industry Federation, introduced the relevant situation of China’s textile industry.In recent years, with the change of the external situation and the expansion of the industry itself, the development of China’s textile industry has entered a cycle of total growth slowing down and profound adjustment and transformation.Since 2020, affected by coVID-19, the operating pressure of the industry has increased significantly.The scale of industry production declined year-on-year, but the decline showed a trend of narrowing.In terms of exports, driven by masks and other epidemic prevention materials, the export of textile industry achieved positive growth. The situation of clothing export was relatively severe in the first half of the year. With the overseas economic restart in the second half of the year, the situation got better, and in August, the clothing export turned negative for the first time.In terms of domestic demand, as China has made positive achievements in epidemic prevention and control, various industries have made steady progress in resuming work and production, domestic sales of textile and clothing products have continued to recover, and online sales have been growing more smoothly.China’s textile enterprises are still facing weak demand, insufficient orders, low product prices and other conditions, operating pressure is prominent.The coVID-19 continues to spread around the world, which has had a certain negative impact on international cooperation in the industry.The pace of outward investment in the industry slowed down, with outward direct investment in the first half of the year down 42.4% year-on-year.

Jeong Dong-chang, vice chairman of the Korea Fiber Industry Association, said that the coVID-19 has a huge impact on the whole world, and the economic impact is more far-reaching than the “great recession of 2008-2009”. Countries, industries and small enterprises are affected to different degrees.Disruptions in the global textile supply chain have hit the entire industry.Against the backdrop of coVID-19, South Korea’s economic situation is not optimistic. Domestic demand is recovering slowly, and the export trade in the second quarter is down 16.5% compared with the first quarter. The national unemployment rate has been rising since March.South Korea’s economy is expected to improve in 2021 on the back of the government’s expansionary fiscal policy.South Korea’s textile industry, the production index fell below 63 points in the second quarter, the recent rebound.In apparel sales, online sales bucked the trend, rising 10% in the second quarter from the first.In terms of the import and export of textiles and clothing, from January to September this year, the export fell by 15.5% compared with the same period last year. Among them, the export to Japan fell by 7% and the export to China by 1%.Imports fell by 6.1 per cent year-on-year, with imports from Japan down 11.5 per cent and From China down 0.04 per cent.

When it comes to the future outlook of the industry, all three parties believe that it depends largely on the trend of the epidemic, as well as the response of countries and subsequent adjustments.In addition, the three parties to November 15 15 countries such as Japan and China, Japan and South Korea signed the regional comprehensive economic partnership agreement exchanged views, agree that this agreement will bring the cooperation textile industry is good, especially in the rules of origin, market access, trade facilitation, foreign investment, etc., once the agreements in force, will further promote the regional economic cooperation and trade of textile industry.

At the end of the meeting, the three parties tentatively plan to hold the “10th China-Japan-ROK Fiber Industry Cooperation Conference” in Japan in November 2021.