Attention!Textile and clothing bosses beware: Burberry has a monopoly on plaid stripes! 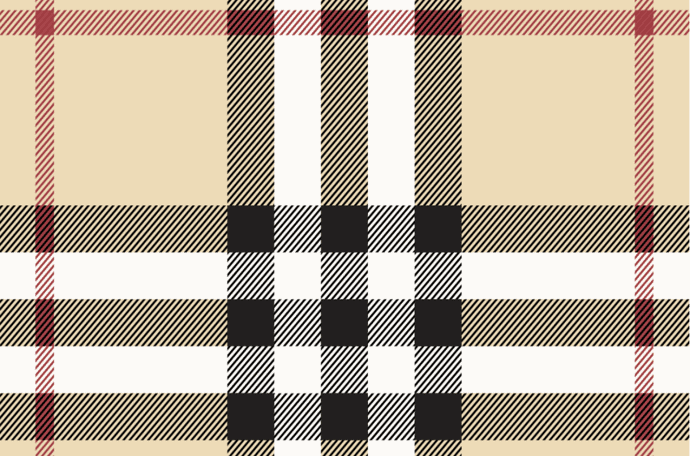 According to The Fashion Law, Italy’s High Court ruled in October that several Chinese companies had infringed on clothing sold by British luxury brand Burberry.

The plaid prints sold by the Chinese companies in Italy are similar to Burberry’s signature plaid prints.Burberry has used this patterned pattern on the lining of its famous Gabardine trench coats since the 1820s.The plaid pattern is now widely used by Burberry in its handbags, perfumes and shoes.

The ruling by Italy’s high court overturned the original court’s decision in the case.Burberry filed a complaint with the Chinese clothing companies in a Court in Rome, alleging that they had violated various Italian criminal laws by infringing Burberry’s trademark.

The Court in Rome ruled against Burberry in the first instance, holding that the “Burberry” brand name was not included in the plaid pattern on the garments worn by the defendant, so consumers are unlikely to believe that these garments are sold by Burberry and thus do not constitute the fact of infringement by the defendant.

Burberry challenged the ruling and appealed to Italy’s highest court, saying the stripes themselves were sufficient evidence of where the goods came from.Therefore, whether or not these unauthorized manufacturers printed the word “Burberry” in the plaid pattern was enough to mislead consumers into believing that Burberry was the source of the goods.

Italy’s highest court sided with Burberry in the final ruling.According to the court, the presence of Burberry’s brand name and print plaid on a copy is not a necessary condition for infringement.”Even in the case of copying part of a trademark, it is likely that there will be confusion with a previously registered trademark and trademark infringement will occur.”

“This ruling sets an important precedent for Burberry,” lawyer Cristiana Andreotta told The Fashion Law. “Not only does it recognize the reputation and uniqueness of Burberry’s treads, it overturns the dangerous precedent that could have been created by the results of the first and second trials, but those rulings are completely out of line with Italian case Law.”

In order to maintain and consolidate the brand image and market positioning, it is a common operation for luxury brands to protect their rights and fight against counterfeiting in the global market.Rampant counterfeiting and fakes not only undermine the upscale image of luxury brands, but also cannibalize their market share.

Burberry appealed, arguing that the goods sold by the two companies, their tags, sales counters and outsourcing were misleading to consumers, and that “plaid patterns” printed on the goods infringed Burberry’s trademark, according to a civil order posted online on the judgment documents.

In its final ruling, the Guangdong Higher People’s Court ruled that Lubyda and Borneo cosmetics should “immediately stop the production and sale of products that infringe Burberry’s exclusive right to use the registered trademark, destroy the products in stock,” and compensate for multiple economic losses.